Rebeca’s ministry will cover four important areas: 1) working with women who have been victims of violence, 2) empower single women 3) bringing education to future young mothers, and 4) children`s ministry from the city of Gracias, Lempira, and villages and towns from the west of Honduras. Rebeca’s ministry will help women and their children in many ways, but will focus on supporting them emotionally and spiritually, inviting them to know God. The long-term goal of this ministry is to one day open a center for women where they can receive help and education. Most importantly, through all these programs, Rebeca will teach the Word of God as hope and truth to these women.

Rebeca was born into a Missionary family. Her parents, Victor and Virgilia Almendarez, also missionaries with Missions Door, raised Rebeca to love the Lord above all things and love her neighbor as herself. Rebeca was always involved working with different ministries and has been part of the worship ministry since she was eight years old. Through working with women’s and children’s ministry, Rebeca saw firsthand how women in Honduras are mistreated. Some statistics state that Honduras is one of the most dangerous countries in the world for women. In fact, many organizations report that of the 463 women murdered in 2016, only 15 cases were investigated. Through this situation, God stirred Rebeca’s heart and she decided to study Psychology to better serve her neighbors and glorify God.

Rebeca is married to Juan Ramon Quintanilla, who has been leading worship in his church. Both of them love to share the Word of God through music, and most importantly, love to serve people as Christ had done on this earth.

Rebeca obtained her Elementary Teaching License in 2012. She then received her bachelor’s in psychology from the University of Honduras of Santa Rosa de Copan in 2016. She is also currently working towards a degree in Theology and in the future, hopes to obtain her master’s in psychology.

But the country's exports are familiar abroad, especially in the United States. The natural resources of Honduras supply the trade of coffee, sugar cane and tropical fruit, as well as petroleum and textiles. Yet economic growth is limited by political instability and drug cartels that compromise security and development. 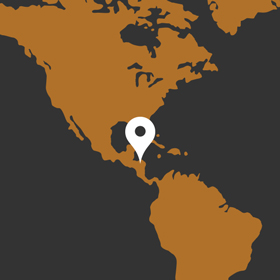